The BIBF opens its training doors in Indonesia

The BIBF opens its training doors in Indonesia 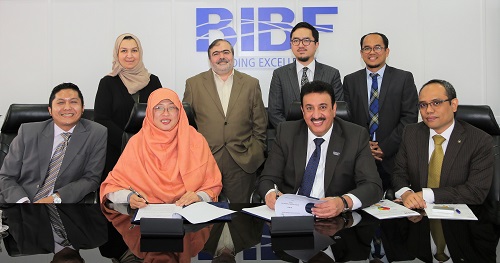 The Bahrain Institute of Banking and Finance (BIBF) has signed a Memorandum of Understanding (MoU) with the Islamic Economics College (STEI) of Tazkia University, a leading university based in Bogor, Indonesia, to develop mutual training and academic co-operation on the basis of quality education.

The MoU was signed at the BIBF premises by the BIBF Director, Dr. Ahmed Al Shaikh, and the Principal of Tazkia University, Dr. Murniati Mukhlisin. The signing was also witnessed by the Head of Chancery of the Embassy of the Republic of Indonesia, Mr. Hardiyono Kurniawan and the Head of the Indonesian Islamic Economics Association, Dr. Sutan Emir Hidayat.

Under the MoU provisions, the two parties will work together in the following areas: Research collaborations; joint seminars, conferences and workshops; integrated knowledge programmes and practical training; exchange staff, students and publications; and promote double degree programmes in the area of Islamic Economics, Finance and Accounting.

The BIBF Director, Dr. Ahmed Al Shaikh stated, “Being the most populated Muslim majority country in the world, Indonesia has tremendous potential for Islamic finance growth. Hopefully, through this promising collaboration, BIBF and Tazkia University can further contribute to the human capital development in Islamic finance, specifically in Indonesia.”

Dr. Ahmad also mentioned that the BIBF was the first-ever international institute to deliver Islamic finance training at the Central Bank of Indonesia 1990s; hence, these efforts will definitely be resumed through this initiative.

The Principal of Tazkia University, Dr. Murniati Mukhlisin explained that this collaboration is considered a strategic move as the Kingdom of Bahrain has rapidly become a global leader in Islamic finance. She cited data from the Global Islamic Finance Report (GIFR) 2018, which placed Bahrain in the top ten ranking together with other Gulf countries such as Saudi Arabia and UAE. From the same ranking Indonesia occupies the sixth position in 2018 with total assets worth 81.8 million US dollars.

Dr. Murniati also said that the needs of banking and Islamic finance human resources are still growing in line with the growth projections of global Islamic financial assets, which is currently around 2.4 trillion US dollars, expected to grow to 3.8 trillion US dollars in 2022. She also mentioned that by adding global insights and certifications from the GCC countries, Tazkia alumni can later compete at an international level.”

BIBF concludes its series of Sukuk Structuring Masterclasses for Lawyers in...