The BIBF awards the Graduates of Bangor University

The BIBF awards the Graduates of Bangor University 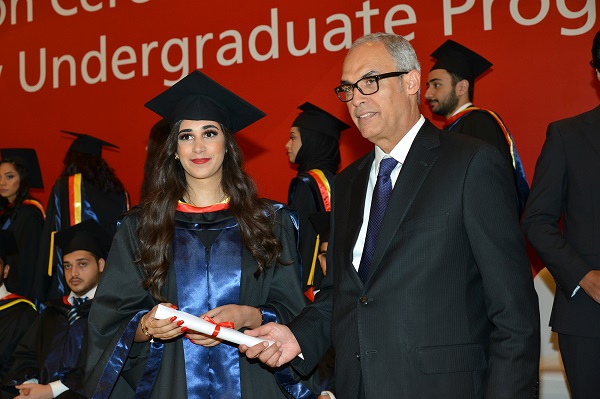 Under the patronage of the Central Bank of Bahrain, the Bahrain Institute of Banking and Finance (BIBF) has celebrated the graduation of its students from the University of Bangor, UK, which was held at The Diplomat Radisson BLU Hotel.

His Excellency, the Governor of the Central Bank of Bahrain, Mr. Rasheed Mohammed AlMaraj, presented the students with diploma certificates while Professor John Hughes President and Vice-Chancellor of Bangor University, presented the Bachelor certificates in the presence of representatives from the Central Bank of Bahrain, Bangor University, as well as graduating students and their parents.

Professor John Hughes, President and Vice-Chancellor of Bangor University, gave a speech at the ceremony, marking his pride in the decade-long relationship between the University of Bangor and the BIBF.

Celebrating this major milestone of the future human capital of our Kingdom, the Director of the BIBF, Dr. Ahmed Al-Shaikh encouraged the graduates to approach the next phase of their lives with utmost professionalism and to apply the learned skillsets of their educational journey towards their professional careers. Additionally Dr. AlShaikh indicated that the graduation ceremony was a confirmation of the BIBF’s commitment to fulfilling the business needs across all sectors. He also noted the focus on Bahrain’s economic development goals, through the provision of highly qualified local human capital, as a key national effort and praised the BIBF’s commitment and contribution as a training provider of quality international programmes, towards achieving these goals, particularly in the banking and financial sector.

The Bahrain Institute of Banking and Finance would like to take this opportunity to congratulate the graduating students of this year on their academic achievement and wish them best of luck in their future careers, hoping to see their contributions to the national economy and the Kingdom’s bright future.

The BIBF Welcomes the Korean Ambassador