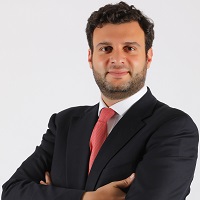 J.K. Khalil is the General Manager of Mastercard Saudi Arabia & Bahrain. He has over 14 years of banking, strategy consulting and technology experience, having held a number of roles across multinational banks, top tier consulting firms and tech start-ups. In his previous role at Mastercard, he was the Middle East Region Lead for Mastercard Advisors, Mastercard’s data-driven strategy consulting practice that enables and supports banking, merchant and government partners around the world.

Prior to Mastercard, J.K. was a senior manager with Strategy& (formerly Booz & Company), based out of Dubai where he was a principal in their financial services practice, where he focused on the wealth management, risk and digital verticals in particular. Before joining Booz & Company in 2012, he held a number of positions at Barclays Bank including strategy, transformation and at one point derivatives sales.

Khalil had also, prior to his MBA, served a number of financial services institutions in Europe in his capacity as a senior IT consultant, including names like BNP Paribas and Munich Re.

He holds an MBA with distinction from the University of Chicago (Booth) and is the President of the GCC Alumni Club chapter. He also holds a Computer Systems & Networks Engineering Degree from the Saint Joseph University in Beirut.